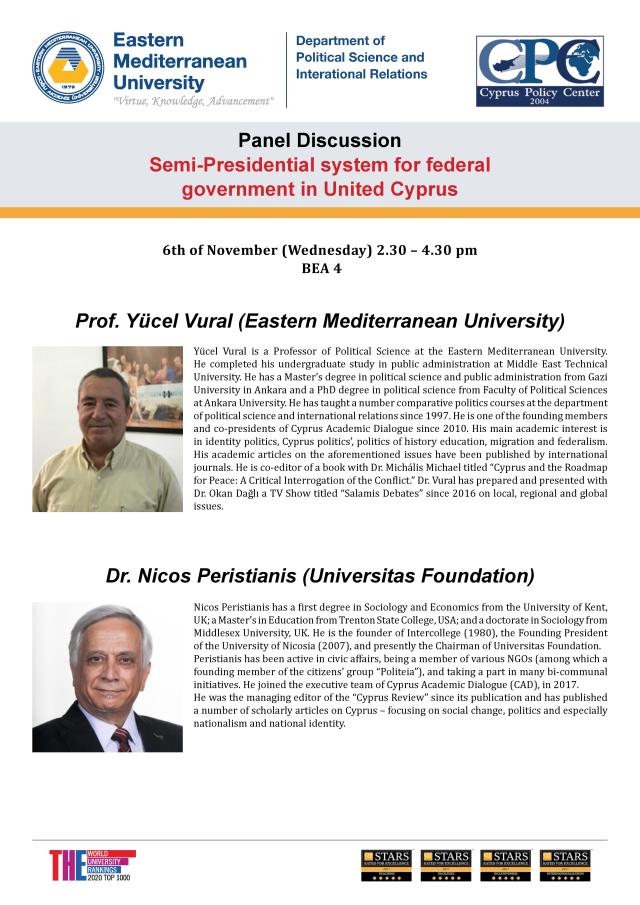 Join us today to listen Professor of #AncientGreekPhilosophy, #MehmetMErginel, on “The Defense of Justice in #Plato‘s Republic” @BEA5, 14:30 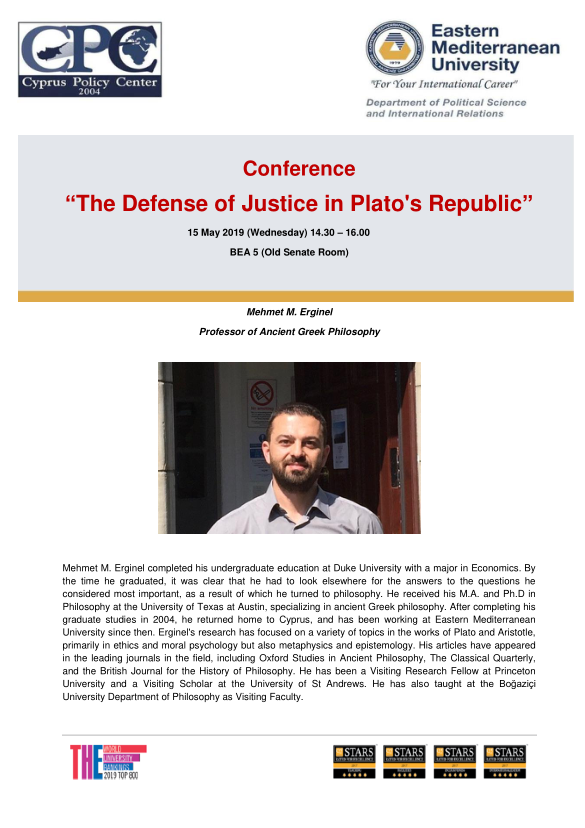 The Eastern Mediterranean University (EMU) Cyprus Policy Center is collaborating with the Department of Political Science and International Affairs to organize a seminar titled “The Defense of Justice in Plato’s Republic”. The speaker of the seminar which will commence at 14:30 today at EMU Business and Economics Faculty BEA5 Hall is going to be Mehmet M. Erginel, a Professor of Ancient Greek Philosophy.

Mehmet M. Erginel completed his undergraduate education at Duke University with a major in Economics. By the time he graduated, it was clear that he had to look elsewhere for the answers to the questions he considered most important, as a result of which he turned to philosophy. He received his M.A. and Ph.D in Philosophy at the University of Texas at Austin, specializing in ancient Greek philosophy. After completing his graduate studies in 2004, he returned home to Cyprus, and has been working at Eastern Mediterranean University since then. Erginel’s research has focused on a variety of topics in the works of Plato and Aristotle, primarily in ethics and moral psychology but also metaphysics and epistemology. His articles have appeared in the leading journals in the field, including Oxford Studies in Ancient Philosophy, The Classical Quarterly, and the British Journal for the History of Philosophy. He has been a Visiting Research Fellow at Princeton University and a Visiting Scholar at the University of St Andrews. He has also taught at the Boğaziçi University Department of Philosophy as Visiting Faculty. 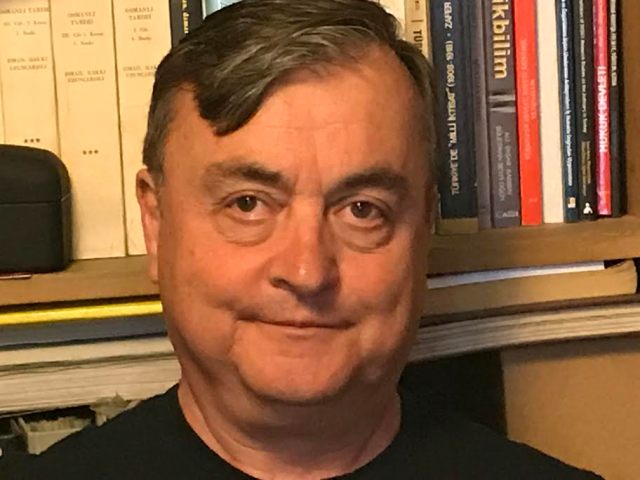 The Eastern Mediterranean University (EMU) Cyprus Policy Center is collaborating with the Department of Political Science and International Affairs to organize a seminar titled “Populism, Authoritarianism and Dictatorship: An Investigation on the Style of the Turkish Presidential System”. The speaker of the seminar which will commence at 14:30 on Wednesday, the 24th of April 2019 at EMU Business and Economics Faculty BEA5 Hall is going to be General Public Law Professor Hüseyin Levent Köker.

Köker has published a lot of articles in Turkish as well as English including Modernization, Kemalism and Democracy (1990), Two Different Policies (2008) and Democracy, Criticism and Turkey (2008). In 2007, Köker was part of a team led by Prof. Dr. Ergun Özbudun who prepared a new constitution draft for Turkey. He is currently working on the topics of establishing a constitution, democratic political theory, post-nation state constitutionalism and cosmopolitanism.

During the seminar Köker will tackle Turkey switching to the Presidential System as a result of the April 2017 referendum, the “right-wing populism” of the new system and approaches that are important in supporting the development of democracy within the scope of “competitive authoritarianism” or “sectarian management”.

Information about the seminar and its outcomes can be obtained from the Cyprus Policy Center and Department of Political Science and International Affairs official websites cpc.emu.edu.tr and https://ir.emu.edu.tr. 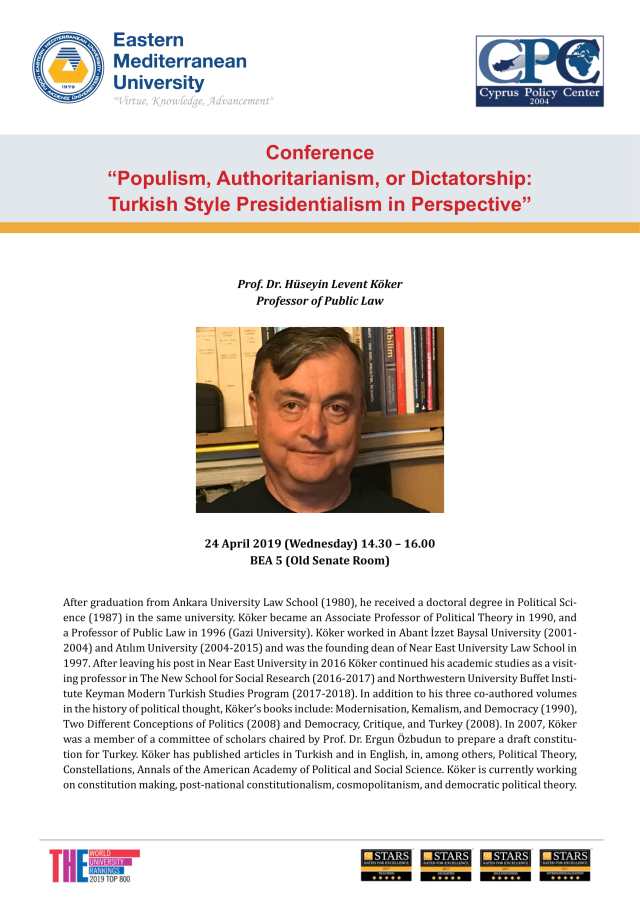 Prof. Dr. Ahmet Sözen, Director of Cyprus Policy Center, participated to TRT World Strait Talk program and discussed on the issue of hydrocarbons in the Eastern Meditterranean and the latest tension between Turkey and Greece, as well as implications for Cyprus issues. 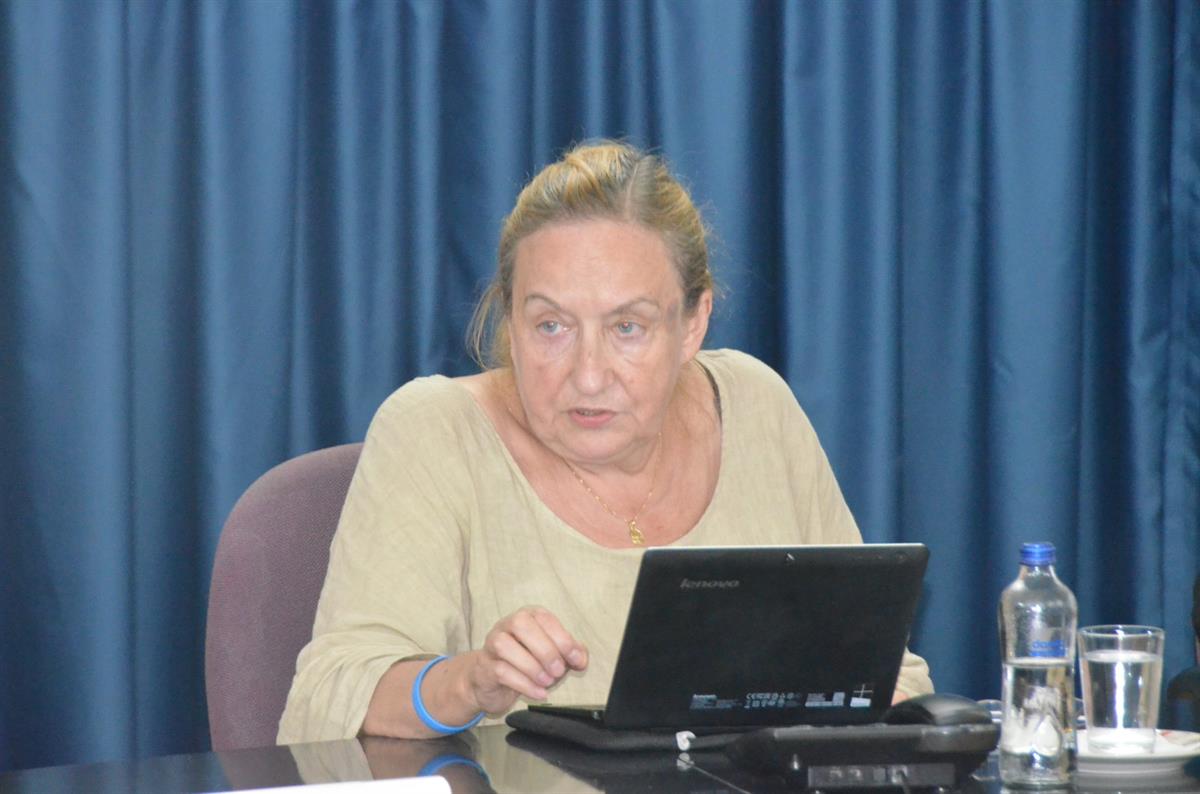 A panel titled  “Human Rigths Protection at the UN and OSCE” was organized by the Eastern Mediterranean University (EMU) Cyprus Policy Center and the Faculty of Business and Economics, Department of Political Science and International Relations. The panel took place on the 17th of October 2018 at the Old Senate room of the International Relations Department in EMU. Following the opening speech of Prof. Dr. Ahmet Sözen, Prof. Dr. Ewa Salkiewicz-Munnerlyn has given a seminer that addressed the mechanisms and tools used by the UN and the OSCE in their attempts to prevent human rights violations by monitoring countries and providing policy recommendations.

Dr Ewa Sałkiewicz-Munnerlyn is Polish diplomat, working at the Ministry of Foreign Affairs since 1991. She has been appointed the charge d’affaires at the Polish Embassy to the Holy See from 1993-1994. Afterwords she served as Polish consul at the Consular Division of the Polish Embassy in Washington D.C. from 1995-1999.  She has been working several times as short term observer of the OSCE during parliamentary and presidential elections in Ukraine, Russia. Moldova and Belarus. She worked as Human Rights Officer of the OSCE in Macedonia (Skopje and Ohrid) and Bosnia and Hercegovina (Pale in Republika Srbska) from 2001-2005. She is teaching international law at the Academy Andrzej Frycz Modrzewski in Krakow, Poland. She taught diplomatic protocol, Holy See diplomacy at different Universities in Poland (WSB in Dąbrowa Górnicza, SAN in Krakow, Collegium Civitas, UKSW and UW in Warsaw. Each year she is teaching within Erasmus + international law at European Universities in Italy (Rome, Pisa, Cagliari, Naples) and other countries such as Turkey (Aydin University), France (Sorbonne), Lithuania (Vilnius). She holds Ph.D. from the Jagiellonian University in Krakow, Poland and post-graduate diploma from the Institut des Hautes Etudes Internationales in Geneva, Switzerland. She worked as HRO at the United Nations in Geneva, Human Rights Commission from 1982 to 1984 and as assistant at the University of Geneva (1984-1986) and the Jagiellonian University in Krakow, Poland from 1986-1990. She speaks English, French, Italian, Russian, Serbian, Spanish. She is married to American and live in Poland since 1999. 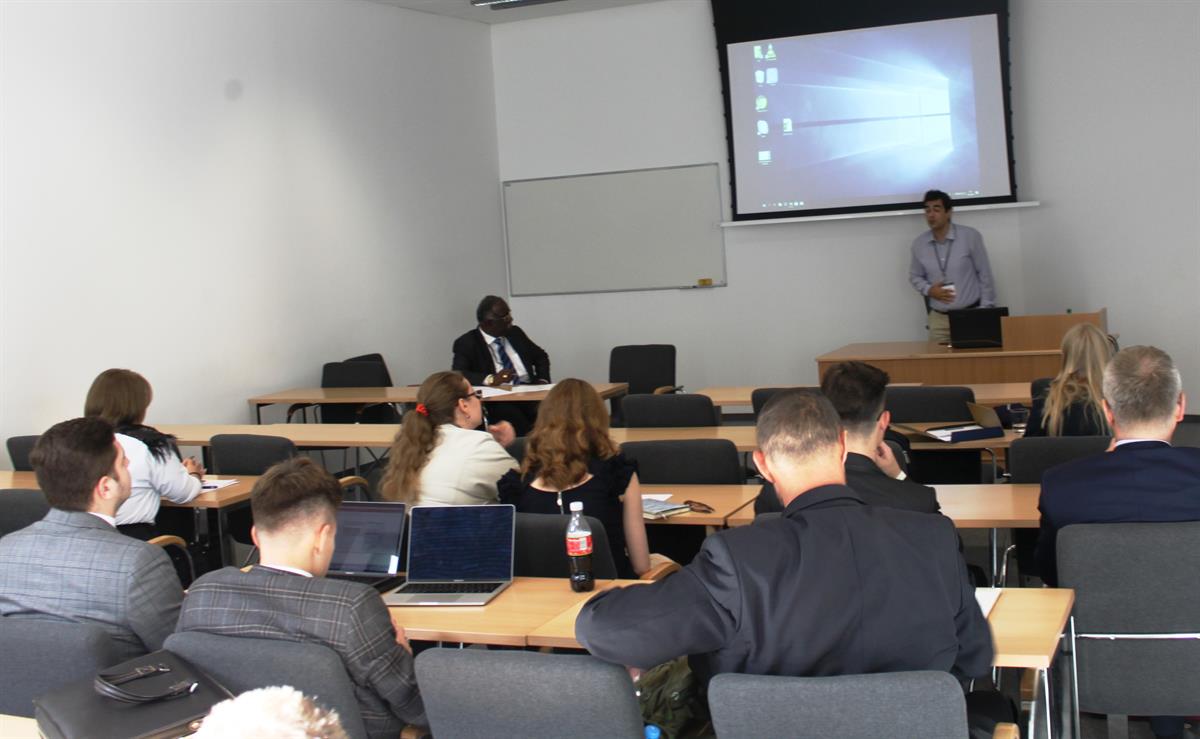 In a Voice of America Speech of Prof Dr Ahmet Sözen on the 2018 National Election of Turkey:

Turks go to the polls Sunday (June 24) in one of modern Turkey’s most important national elections with both parliament and the presidency at stake at the same time, a first in Turkish history under a new constitution.  It will also be a verdict on the 15-year rule of controversial President Recep Tayyip Erdogan, who has been given new executive powers.

Mr. Erdogan must capture more than 50-percent of the vote to avoid a July 8th runoff.  His ruling Justice and Development Party (AKP) must take also take more than 300-seats in the 600-seat parliament to avoid a coalition partnership.  Ahmet Sozen is a political science and international affairs professor at Eastern Mediterranean University on Cyprus.  He told VOA’s Victor Beattie

“the outcome is crucial because Turkey matters to the world, it is the second biggest army in the NATO; So who rules Turkey really matters; So the test this time is going to be between whether people are happy with a decades and a half long rule by Erdoğan and Justice and Development Party; Or, whether the Turks are ready for change; But of course the election is going to take place under extraordinary law, the state of emergency which is continuing in the last two years after the coup attempt in the summer of 2016; Erdoğan’s party is holding the upperhand when it comes to the media coverage because majority of the Turkish media is mostly very friendly with Erdoğan;under control of people who are supporters of Erdoğan; so, the opposition is entering into this crucial election in a disadvantaged position.

Will this election turn on the first time young voters?

I think so, because Turkey is a country with a huge population which is relatively young, definitely the young voters are very important; we will see how many of them or what percentage of them will actually go to the polls; The voters turn on in Turkey has always been much higher.

Do you expect a run off July 8th?

If the elections are going to take place in a fair and just vote let say, that is my expectation, We have several candidates running in the presidential election, especially not in the parliamentary but presidential election, the more candidates we have, the more votes will be distributed among them, it would be very difficult for one candidate to get more than 50% of the votes in the first round.

How important is the outcome of this election to Turkey, its allies, the European Union, the US and Syria?

I think that this is very important because especially in the last three years Turkey has been ruled in a way that there is a high polarization in the country; between those who support Erdoğan, for the matter of stability, on the other hand, we have those who believe that this tension and polarization in Turkey is very dangerous, that we need to reestablish democratic rule again, we have to uphold rule of law and democracy in Turkey and go back to the parliamentary system, rather than handing substantive executive powers into the hands of one man.”

This seminar explored what does the “Brussels Dialogue”, one of the cornerstones of current EU peacebuilding activities in Kosovo, mean for the Serbs in the North of Kosovo. As argued by many, the EU-brokered dialogue, which led to the signing of the Brussels agreement (2013), is to be regarded as a “success” of EU peacebuilding. However, such positive assessments usually overlook the consequences for the locals and their perception of “success”. By linking the theory on the EU as a normative power with the academic literature on the local aspects of peacebuilding, this project argues that despite the supposed success, these concrete EU peacebuilding efforts had, among others, certain negative social psychological implications for the Serbs in the North of Kosovo and contributed to the worsening of intra-ethnic relations within this community. These processes, in turn, question the EU peacebuilding “success”, and the overall perception of the EU as a normative power in this territory.